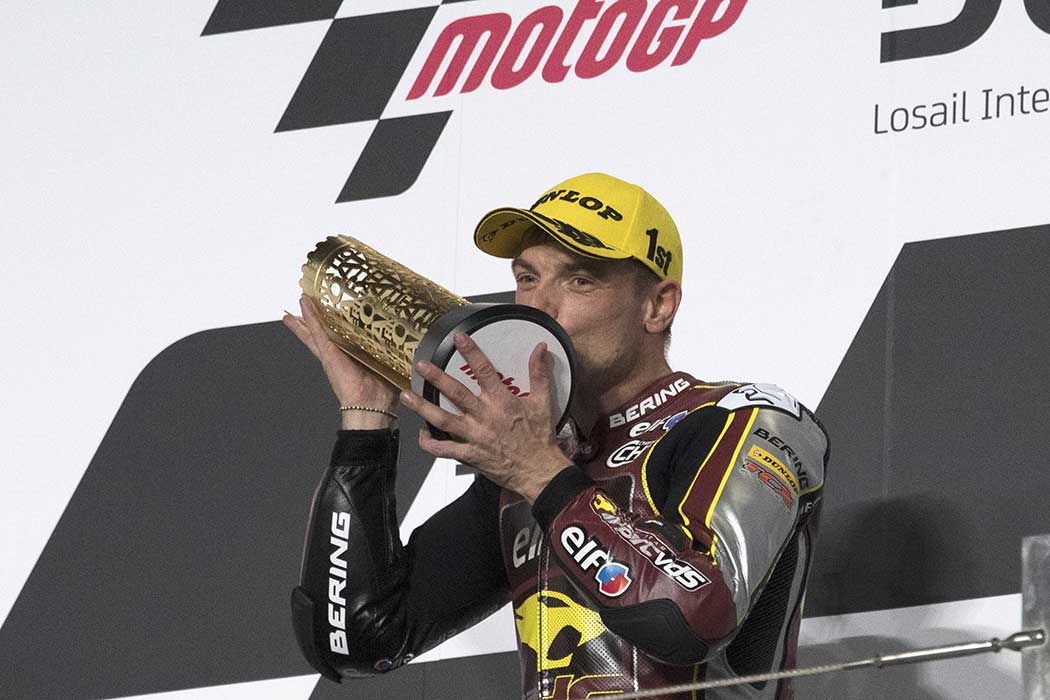 Sam Lowes emerged victorious in a thrilling late duel to win his second Moto2 race in succession while Augusto Fernandez made big strides to score an excellent sixth.

The Losail International Circuit was the scene of a second Moto2 race in as many weeks, and was one where Elf Marc VDS Racing Team riders Sam Lowes and Augusto Fernandez both finished in the top six.

Despite the strong wind, Lowes’ race winning pace was incredible. The Englishman posted a new race record time for the Moto2 class – 39’52.702 – and was over 10 seconds quicker than the race here one week ago.

After making drastic changes to his set-up on Friday, Augusto felt more comfortable in race two. Starting from tenth on the grid, the 23-year old was in the midst of an eight-rider fight for fifth place for the entire race.

He finished the race strongly, and climbed one place on the last lap to finish sixth. To show his improvement over the second weekend of the year, Fernandez’s race time was 11 seconds faster than he managed one week ago.

“I’m getting my confidence back”

“I’m very happy! It seems this set-up direction is the correct one. It has been a really hard two weeks here. We were a bit lost in the test and the first race, changing parts. And we didn’t have so much time to test for the races because of the times of the sessions. It was difficult to turn around the situation. But after a tough start, we got sixth position and sit seventh in the championship. Also, I’m getting my confidence back. The end of the race was so strong. I had good pace and was making 1’59s. I was strong on the brakes and passing a lot of people. We will take all of these positives to Portimao. Step by step we are getting closer.”

Starting from his second pole position of the season, Lowes got a solid start and passed early leader Marco Bezzecchi on the fourth lap of 20.

But this wasn’t straightforward. Lowes faced intense pressure from Remy Gardner through the second half of the race. His lead never exceeded 0.483s but he kept his composure, and posted the fastest time of the race – a 1’58.954 – on the last lap to win by 0.190s.

Lowes’ victory means he is the first rider in Moto2 history to win the opening two races from pole position. What’s more, he becomes the first British rider to win the first two races of the season in the intermediate category since Mike Hailwood did so in 1966!

“I think we saved the best for last”

“We had three weeks here in the desert with very changeable conditions. It was definitely not easy. But I think we saved the best for last! That was really fast race pace – the fastest we’ve had in Qatar in Moto2. I’m really happy with how I approached these two races. I feel I’ve improved in myself and can be more relaxed in the race. I know it’s only the start of the year, but it’s been a really good start. To have somebody behind me all race and not make any mistakes is really important and that will give me a lot of confidence. When I won last year and last week, I had a bigger gap so this was a bit different and I managed fine and felt really comfortable. I’m looking forward to getting to Portugal and being able to ride there with two hands this time! Last year that wasn’t the case. We’ve had a great few weeks, everyone is ready for home and I couldn’t be happier to take 50 points back.”