Skip to content
BikerShootMarch 15, 2021BlogLeave a Comment on Pirelli and Brandon Paasch Emerge Triumphant in the Daytona 200 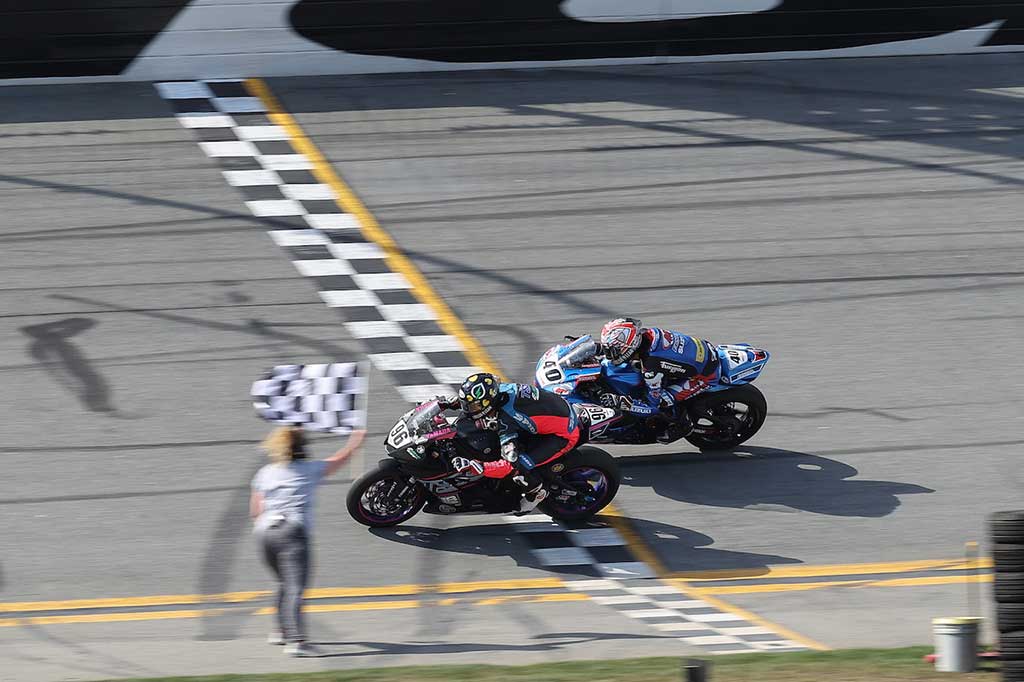 DAYTONA, Fla. (March 14, 2021) – Pirelli Tire North America returned to the winner’s circle once again at the 79th running of the Daytona 200, claiming three out of the top four positions in the 57-lap shootout. TSE Racing’s Brandon Paasch has come close to victory at the speedway previously, but 2021 marked the year that the 19-year old would get the job done, piloting his Yamaha YZF-R6 to victory by 0.031 of a second. Tyler O’Hara used an impressive late race charge to take the final step of the podium in third aboard his Floyd’s of Leadville Kawasaki Ninja® ZX™-6R.

“It feels so good to get the job done here in Daytona,” said Paasch. “This has been a goal of mine for a long time, and to finally check this off the list, just feels amazing! My Pirelli DIABLO™ Superbike slicks worked incredible all day, especially towards the end of the race when it really counted, allowing me to chip away at the lead and make the pass for the win.”

Both Paasch’s YZF-R6 and O’Hara’s ZX-6R relied on the performance of Pirelli’s DIABLO™ Superbike SC1 120/70-17 front tire and DIABLO™ Superbike Daytona 190/60-17 rear tire to handle the challenges of the high-banked 3.51-mile course.

“I let the leaders get away from me a little bit there in the beginning laps,” said O’Hara. “I just never gave up though, and my Pirelli tires were working awesome. I’m so stoked to be up here on the podium, but to be honest, I really wanted to get that top step of the podium.”

Paasch’s relentless efforts saw him make up a six-second gap in the final stages of the race, including using the traction of his Pirelli slicks to get a drive and make the pass for the lead to take the victory on the final lap. O’Hara narrowly edged out fellow Pirelli rider Michael Barnes in a drag race to the checkered flag, finishing third and fourth, respectively. Geoff May would race to a hard-fought seventh and Ryan Jones carded a top-10 in ninth.

“What a way to make a return to the Daytona 200,” said Oscar Solis, road racing manager, Pirelli. “All weekend long our guys were competitive at the front of the field. Brandon [Paasch] been trying for this win the past few year’s, so to see him succeed and accomplish his goal is something that everyone at Pirelli is proud of. The pace that the guys were able to maintain with the DIABLO™ Superbike range showcases not only their performance, but durability, especially in a endurance-style format like we had today.”