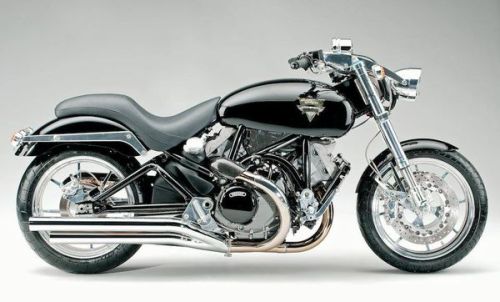 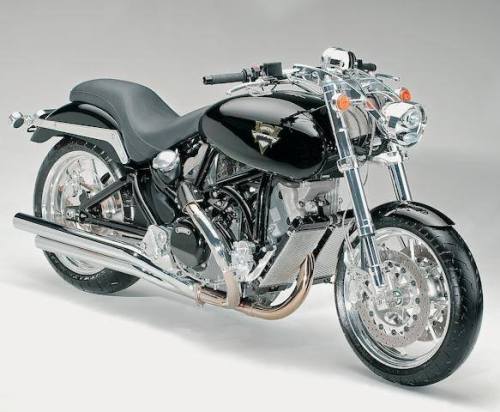 With its tusk-like combination handlebar clamps/headlight hangers leading the way, the Black Eagle power-cruiser was the most stylistically controversial of the neo-Vincents. More than the other models it was rolling, thundering proof that, “Barney Li is not trying to resurrect your Uncle Albert’s Black Shadow,” as

put it in 2004. “Li is a man on a mission, whether you like it or not. Starting in 1994 it’s been Li’s quest – make that crusade – to bring the mighty Vincent V-Twin back to rortin’ snortin’ life, and if he just happens to trample on what your idea of a proper Vincent should be…well, too bad.”

Li’s reasoning was that had Vincent-HRD Ltd. made it to Y2K, it would undoubtedly have a cruiser in the company catalog – just like virtually every other bike-maker – reflecting what consumers were buying. And if so, it would be a cruiser like no other, a game-changer. While Li was always respectful of the Vincent mystique, he wasn’t interested in simply burnishing the legend. He wanted to add to it so, yes, a Vincent cruiser.

Classic sensibilities about boulevard bikes aside, just how good was the Black Eagle? After a test ride on the prototype,

subtitled its story, “Maybe the best cruiser ever built…if it ever gets built.”

Handmade by Roush Industries and sitting on lowered suspension, the Black Eagle had the right stance. Designer James Parker intended the bike to be, “stiletto-like, very thin, almost spidery, with a certain lightness to it that cruisers generally don’t have.”

Cruisers generally didn’t have anywhere near the speed and acceleration of the Black Eagle, either. At a time when Harley riders were spending thousands and thousands of dollars to achieve 100-plus horsepower of questionable reliability, Li’s Vincents made 130 ponies all day long thanks to the superb engineering and inherent reliability of Honda’s world-class RC51 V-Twin.

again: “One ride on the Black Eagle tends to make you forget the history books. Considerably lighter and way more powerful than anything in its class, this is a power-cruiser with a Superbike soundtrack. It rolls easily into corners, takes a set and then slingshots out with uncommon authority.”

Road Test Editor Don Canet, usually no great fan of the genre, came back from his test session aboard the Black Eagle positively giddy. “

,” he said, “is one fun cruiser.” Offered on a Bill of Sale.FOOTNOTES