Skip to content
BikerShootJanuary 20, 2021Biker GirlsLeave a Comment on 1937From Mecum:This 250cc Benelli is the road-going bike of… 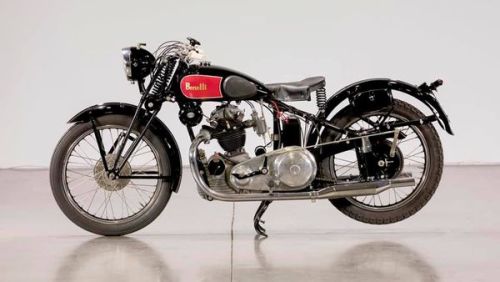 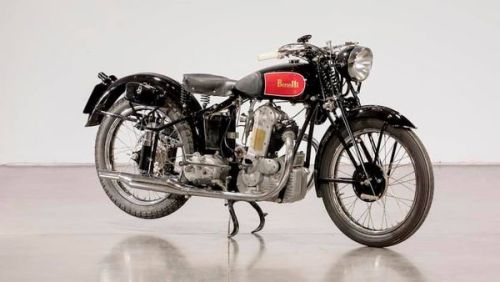 1937From Mecum:This 250cc Benelli is the road-going bike of from the firm whose overhead-camshaft motorcycles competed on the level with the best in the world in 1937: DKW and Moto Guzzi. In the 1930s, Benelli was part of the Pentarchia, the “Big 5” motorcycle builders in Italy, with Moto Guzzi, Gilera, Bianchi and Garelli. The Benelli family business was founded in 1911 as a small workshop in Pesaro by the far-sighted mother of the six fratelli Benelli to ensure they had jobs. Their workshop initially repaired cars and anything else mechanical, but by the outbreak of World War I, the family was making aircraft and motorcycle parts for other factories. Their first motorcycle was built in 1911, a 98cc two-stroke clip-on bicycle motor that was so powerful it quickly broke its frame. A too-hot motor was not a bad thing, so the brothers built a chassis in 1921, the first proper Benelli motorcycle. By the next year the brothers developed a 150cc four-stroke single-cylinder machine, and the youngest brother, Antonio “Tonino” Benelli had ambitions to become an Italian racing champion. He quickly made his mark on the Italian racing scene on the 150cc class, then on 175cc OHC racers of his family’s design, which was produced as a roadster model as well. A DOHC factory racer of 175cc was rolled out for Tonino in 1932 that won the Italian Championship for the next five years, and in 1935, a 250cc version was added. This proved a world-class racer and had regular, ding-dong battles with the supercharged Moto Guzzi flat singles and incredibly loud DKW supercharged two-strokes. The Benelli was the most sophisticated of all with a gear-driven DOHC, and in 1939, Ted Mellors won the Isle of Man Junior TT with one. The 250cc factory racer also took the World Speed Record for its class in 1937 at 113 MPH, which also beat the 350cc record. Benelli’s roadster 175cc, 250cc and 500cc OHC singles were often put to use racing, as they were fast, reliable, handled very well and were simple to maintain.

This fantastic 1937 Benelli 250cc OHC motorcycle hails from the company’s heyday in competition, which was highlighted by a long line of 250cc Italian Championships. The machine came from Italy to the MC Collection, which conducted a thorough in-house restoration taking 417 hours in 2013. This matching-numbers Benelli comes with an Italian registration number, V11 7201